Much has happened since I last blogged about our renovation, but you wouldn’t think it to look at the sorry mess we are still living in.  In my last post I wrote how hard it was to get the right people and that we were waiting on dates to start the work.  Well, now it is the end of April (we moved in November) and every room is a jumble with bits and bobs started but nothing finished.

My biggest nightmare – we have just had the new loo fitted (after almost four weeks with a bucket to flush with).  The problem arose from the fact that the bathroom was clad in a wood ceiling – rather nautical, with some sort of plastic panels on the walls.  When the plastic and wood came off, so did much of the plaster and the ceiling, so making good has taken some time.  We had the old airing cupboard removed to make more room for the shower and basin which as you can see in the picture above, were crammed together. 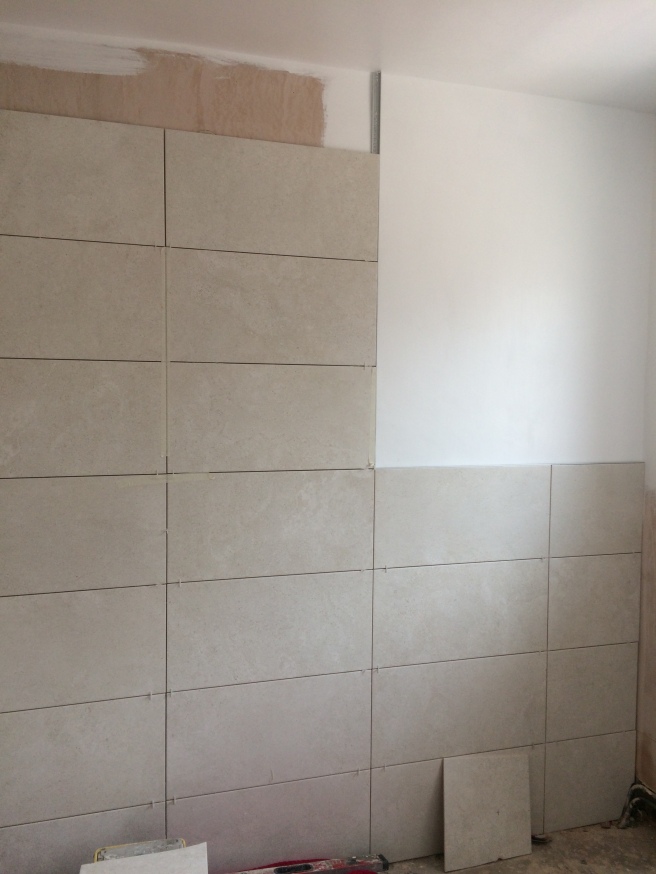 I should mention we have only one bathroom, so we have been showering at Steve’s sister’s home which has been a Godsend.  To add to this state of affairs, Steve and I have negligible DIY skills, so everything needs to be brought in. You would wonder why we didn’t buy a new build, but there you have it.  The bathroom should be finished by the weekend so we should be clean very soon!

Work is due to start in about ten days.  We took up the old flowery carpet to reveal this rather colourful yellow and orange vinyl floor.  The rods had been fitted over the felt and the door plate had helpfully been fitted under the door architrave.

I’ve chosen a shaker style kitchen in a colour called mussel, which should be easy on the eye.

We didn’t dare have new carpets as there is so much dust about, but we have wallpapered in this striking floral pattern and I have upcycled my old Queen Anne style side table as a dressing table.

Steve doesn’t mind a bit of wallpapering and painting thankfully! 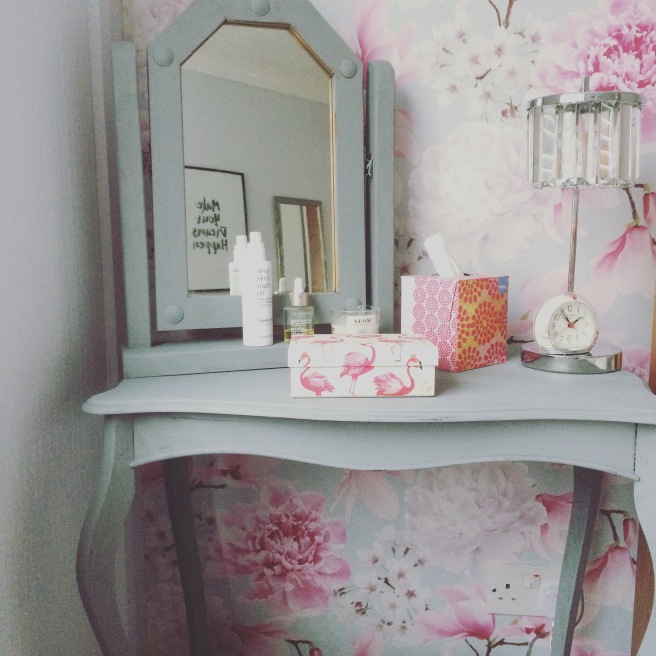 Nothing to see here – still the old carpet but I did buy a pair of Laura Ashley sofas because I couldn’t resist them.  Too soon by far, but it made me happy at the time.

I upcycled the hall cupboard by painting it with grey chalk paint and we have had the floor tiled in a grey slate effect.

I’m pleased to see lots of bulbs popping up which work well with my existing pots from the old place.  I’ve made a start on the veg patch with some rhubarb, raspberry canes, broad beans and a couple of fruit trees. Most of this though will be next year’s project.

So, as you can see, not really that much to report.  However, I think in the next month, there will be significant changes and the place will start to feel like home.

Haircut, highlights and a blow dry always makes you feel better
Prepping a #slimmingworld Moroccan aubergine and couscous dish for supper tonight from the new recipe book.
Spotted on our walk - I’d love to plant one of these so will add it to my very long list!
Gorgeous hellebore #inmygardentoday
Loved this flower arrangement that I came across in Palma
Lovely display at the florist in Hoole
%d bloggers like this: